I'm hoping this is the first in a new series on Six Giraffes. I'm often fascinated by the living and non-living objects in our everyday experience, and I like to give myself a mini-class on different subjects from time to time. Of course, I hardly remember any of the facts I learn later on, which makes it fun to reread when the mood strikes. So without further ado...HUMMINGBIRDS! 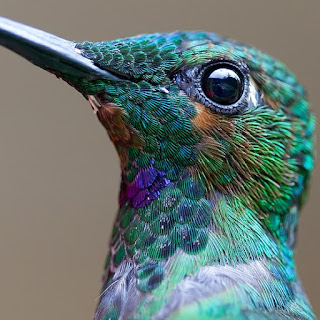 Who can resist this swift little creature with its iridescent flashes?

One of my new life goals is to capture these intelligent aviators with my camera. They are often bold. I've come face to face with three at once, determined to figure out what I was doing in their backyard. My current hummingbird friend seems to visit my hanging fuchsia every day in the noon hour. I'm tempted to silently camp out on the patio to see if I can snap a shot of her in action. During my "classtime" I came across the World of Hummingbirds website and was quickly enthralled. I do love a good list.

Here are some interesting facts about the tiniest bird in the world. 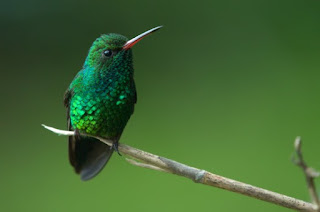 The Numbers
~ Breathing: about 250 breaths per minute while at rest
~ Heart rate: up to 1,260 times per minute
~ Metabolism: roughly 100 times that of an elephant
~ Body temperature: about 107 degrees Fahrenheit (40 degrees Celsius)
~ Weight: anywhere between 2 and 20 grams (A penny weighs 2.5 grams.)
~ Lifespan: average 5 years but can live for over 10
~ Feathers: about 940 for an average sized hummingbird
~ 30% of a hummingbird's weight consists of flight muscles. (Humans’ pectoral muscles are about 5% of body weight.)

A hummingbird's brain is 4.2% of its body weight, the largest proportion in the bird kingdom. With their high intelligence, they can remember every flower they have been to and how long it will take a flower to refill. They can hear better and see farther than humans. They can see ultraviolet light but have no sense of smell. 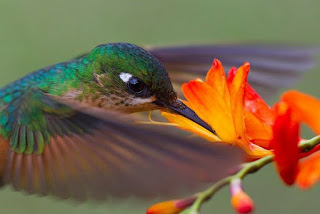 Food Frenzy
Hummingbirds do not drink though their beaks like a straw. They lap up nectar with their tongues. A hummingbird's tongue is grooved like the shape of a "W".
Hummingbirds need to eat on average 7 times per hour for about 30-60 seconds. They will visit an average of 1,000 flowers per day for nectar. They also eat small soft bugs for protein.

Hummingbirds will not get addicted to a hummingbird feeder, so fill with abandon! They know when to migrate south for the winter if necessary. 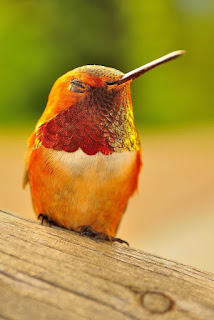 A hummingbird baby is about the size of a penny. They cannot fly at birth and will remain in the nest for three weeks.

Take Flight
Hummingbirds are the only birds that can fly both forward and backwards. They can also hover in mid-air, fly sideways, and even upside-down. A hummingbird's wings will rotate in a full circle. 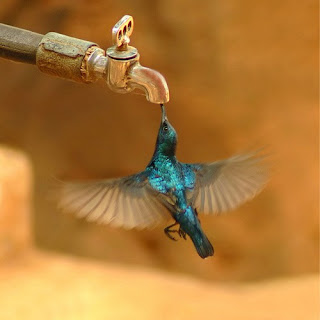 World Travelers or Homebodies?
Hummingbirds are only found naturally in the Americas. They are found as far north as Alaska and as far south as Chile.

Ruby-Throated Hummingbirds have been known to travel 500 miles over the Gulf of Mexico to breeding grounds, which takes about 20 hours.

Some hummingbirds will travel over two-thousand (2,000) miles twice a year during migration times. The Rufous Hummingbird travels the farthest north of any other hummingbird to migrate, all the way from Mexico to Alaska.

Apparently some people think hummingbirds migrate on the backs of geese. This is not true! Geese fly on different migration paths or fly-zones than hummingbirds.

*Most of the 300+ members of the hummingbird species do not migrate.

Hummingbirds have very weak feet and can barely walk. While they are very comfortable in flight, they may actually spend most of their life perching. 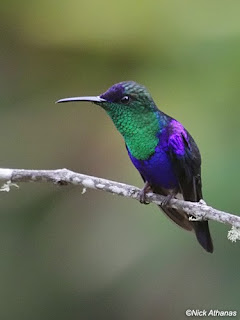 Power Save Mode
When hummingbirds sleep at night, they go into a hibernation-like state called torpor to conserve up to 60% of their available energy.. When a hummingbird goes into torpor, their metabolic rate is 1/15 that of normal sleep. Their heart rate can drop to as few as 50 beats per minute, and their body temperature lowers to 30 degrees Fahrenheit (20 degrees Celsius)! They will appear as if they are dead and have occasionally been found to be hanging upside-down. It can take up to an hour for a hummingbird to fully recover from torpor. 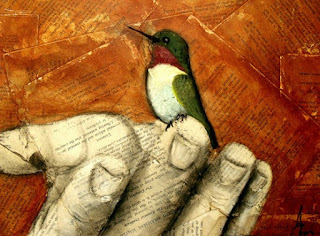 {Barbed Wire}
I hope you've been as fascinated as I was. Here's to backyard birding, art appreciation, and inspiration! 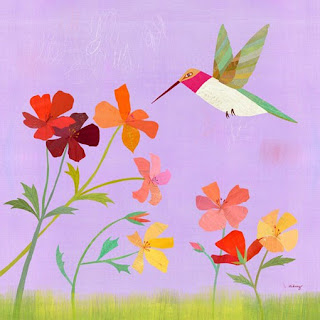 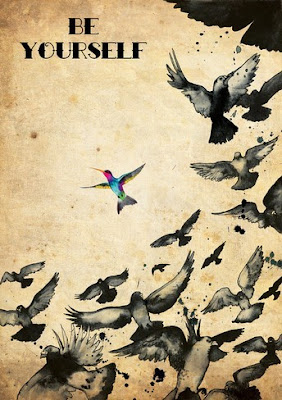