Early on in the spring I posted about my plans for a summer vegetable garden bed. Since we rent our little cottage we call The Grass House, we are limited in our renovation abilities. Still, an empty corner of packed dirt called out to be tilled. I'm happy to report--things are growing! Here's a sunny update on what's blooming (during the coldest week of our summer so far.)

First I have to give enormous, love-filled thanks to my Ben, who ended up putting in all the manual labor as I sat in the director's chair with a swollen foot. He is above and beyond expectation and simply the dreamiest. Thanks also to my mom, another great backyard gardener who helped put the bed in, and Ben's parents who gave us their old cement bricks.

I was excited to try some options that would maximize the small space. Notice that the bed is more a trapezoid than a rectangle. Great idea for using a corner space but if you don't spend time on measurements and angles, you'll end up needing to break some bricks to make them fit. 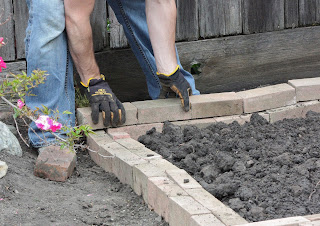 We decided to put the second layer of bricks face down for stability. It's holding well!

I loved seeing this bed come together and dumping it full of rich compost to amend the soil. Between the end of the school year and hobbling on crutches, it took awhile to get our plants in the ground. Finally we found sun gold tomatoes, watermelon beefsteak tomatoes, a volunteer cherry from Ben's brother-in-law, and zucchini all from my favorite local nursery, Wegman's. 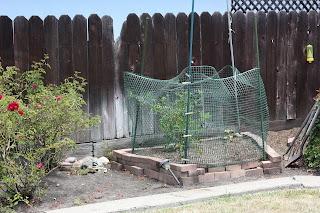 The zucchini were apparently a tasty midnight snack for some creature (maybe the neighbor cat?) and we decided to wall the bed with netting until the plants become more established.

I had originally planned to line a small upper tier with another layer of bricks for herbs. This would give the bed an interesting shape and allow the center plants to be reached more easily. In the end, I decided against it. The space didn't really allow for it with the plants I had, but I'd be curious to try it in the next round. I planted some lime basil and cilantro seeds around the tomato plants. I read somewhere that planting basil next to tomatoes brings out their flavor. We'll see if they sprout. 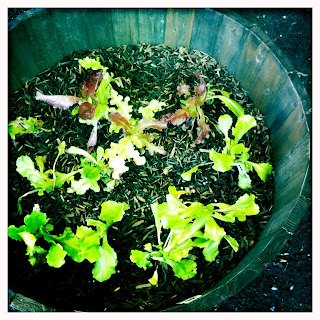 Late addition--mixed greens in an oak barrel in the shade!
Posted by Rebecca at 2:36 PM